A big thank you to all who donated gifts at our Benefice service in Lidgate.  We are able to send 30 presents to local children in the care of Bury St Edmunds social services. 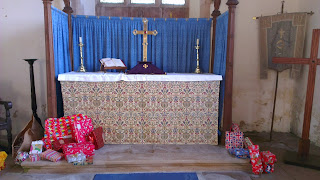 Posted by Bansfield Benefice at 10:48 PM No comments:

Toy Service at Lidgate - 8th December at 10am

Every year on a Sunday in early December we hold our Toy Service at one of our services. This used to be a Wickhambrook church event but now this has expanded to be a Bansfield Benefice-wide event. During the service Children's Christmas Gifts are presented by the congregation at the altar for later donation by the benefice to Bury St Edmunds Social Services.

Bury St Edmunds Social Services are always very pleased with the donations we give them and they tell us that it makes such a huge difference to the children in their care who otherwise would receive either none or few gifts at Christmas.

People who can not or do not wish to attend the service but still want to donate presents can arrange to do so by emailing contact@bansfieldbenefice.org.uk.

We ask that the presents are wrapped and have a label on them indicating whether the present is for a boy or girl as well as the age of the child to receive it.

Please think of others less fortunate at this festive time and donate a present.
Posted by Bansfield Benefice at 11:38 PM No comments:

The disaster of Syria's exodus is turned from exposure on our media by the most destructive Typhoon ever seen, decimating home and livelihood amongst the Philippines.

The natural world coupled with our own capacity for self destruction exposes just how fragile our 21st century comforts and securities really are.

Whilst such destructive force would have been far from the mind of the peoples of 1st century Palestine, the fragility of day to day existence such as these disasters have inflicted on so many was not.

Just as the star of our Christmas story, Rome too was in the ascendancy shining bright upon hard pressed peoples across the known world, as she expounded the hope of improved lifestyles by excellence in organisation transport trade agriculture and civil engineering. Not least to Rome's success was the assurance of peace, subjection to Rome quickly enabled advancement and ownership in the structures of the empires governance.

Joseph and Mary however sheltered in the light of a different star, a star which bought nations beyond even Rome's reach to wonder at a new path for this world's hope. For even as today's civilisation is seen to stand on shaky foundations, the breadbasket of Rome was eventually to fail, and, just as today, inter-national enmity came to caste its long shadow over the bright myths of Roman sureties.

Bethlehem's star spoke of the rise of a Kingdom begun not in technology and consumption but in parent and child. The Holy family's struggle for survival is the same seen in this day by hard pressed people's the world over, fleeing oppression and looking for shelter and daily bread.

The Way of our Christmas story's Daystar is the Way of endurance, for the one subjected to suffering and death on the cross is seen again in those who follow the Way of Christ today. Loving as He loved and not for trade or self-gain gives peoples still in this day their hope for life in all its fullness.

Please remember your gift giving for today's poor as those blessed in God's Kingdom, please give generously for all who seek home and shelter this Christmastide.

May all peoples know the blessing of Righteousness and Peace this Christmas.